The ongoing process of transformation in Europe’s closest neighborhood is a historical challenge for our continent. More than ever military conflicts and political uncertainty in these countries make Europe magnetic to people looking for better life. Against this background the fear emerges that migration flows to Europe will intensify and could threaten civic security and undermine social order in Europe. 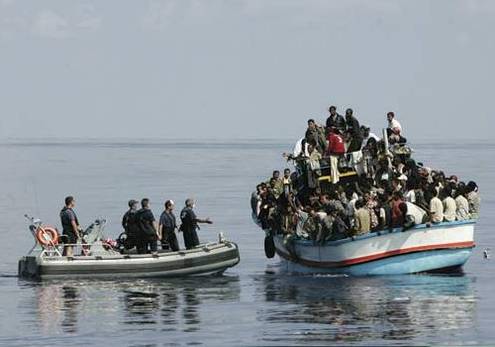 By Andrey Kovatchev, UEF Vice-President. (The author is responsible for the content. This policy paper can not be considered as a statement of view by the Union of European Federalists (UEF)).

These apprehensions are quite visible in the light of difficult integration of immigrants that we are facing in Europe. Immigrants with different cultural and religious background feed extreme ideas all over Europe, especially in times of economic and financial crisis. They gain speed in calling upon opposition to multi-cultural society model. Sadly, they found their most sinister expression in the terrorist attacks in Norway from July 2011.

Are Europe’s worries justified? This is to ask whether Europe has the adequate resources to properly face the challenge of migration and ensure the security of every European citizen.

This is the key question of the current debate on the future of the common EU immigration and asylum policy as well as the changes to the Schengen acquis. The Union of European Federalists (UEF) should welcome this debate as a most needed and opportune one regarding policy’s positive development. We have already witnessed the position of some Member States demonstrated by the concrete measures of their national authorities. As we made it clear early on, we find the reestablishment of internal border control undertaken by Denmark, which is also being considered by some other Member States, unacceptable. These actions are integration reversal! Contrary to any nation-centric approach, the UEF should believe the debate could reach its ends, i.e. counts for better policy solutions, only if as many EU political, NGOs’ and civil society voices as possible make themselves heard.

This paper is my, as a federalist, input to this debate.

What needs to be defended?

The UEF should consider migration is not an isolated national issue, rather than it affects all European citizens. That is why its management should be ensured within the framework of common institutions and mechanisms. The UEF should oppose the political approach prone to „national egoism“, hidden under declared national security threat. In our view, the European Union – and its principles of solidarity and shared responsibility – is the right institutional framework, which could properly face the challenge of migration and integration of immigrants in Europe and could provide for effective external border security management.

It should be our position that the tools the EU currently uses to implement its policy in the field of migration must be enhanced in line with the above principles. Member States should be ready to guarantee the functioning of effective burden-sharing mechanisms. The UEF should believe this key integration achievement should be used by every EU Member State to the benefit and security of every European citizen. At the same time, we consider the policy reform, we are advocating, should not happen at the expense of the planned Schengen enlargement to new countries.

The European Federalists should consider that the Schengen area with Bulgaria and Romania, effectively incorporated within, could provide more security and sustainability to the Schengen framework. The capacity of these countries to assume their responsibilities under the Schengen acquis has been assessed by the experts of the Member States. They recognized that both countries have met all criteria thus proving their capability of securing the external borders of the EU. In this regard, we welcome their conclusions and we also back the Resolution of the European Parliament from early June 2011 declaring Bulgaria and Romania reliable Schengen partners.

These countries were certified, for instance, as establishing best practices in their Black Sea maritime border control, which can be an example for some older Schengen Members, especially in the Mediterranean area. Recently, Bulgaria and Romania also adopted National strategies on migration and asylum. Detailed analysis of the strengths and deficiencies of the national authorities to manage this challenge was carried out. Specific measures were adopted in order to ensure the proper implementation of border control, visas, and fight against irregular migration, return, and human trafficking, asylum, migration and integration policies. Both countries put the stress on administrative and staff capacity enhancement as well as on state cooperation with the non-governmental sector.

The UEF should expects that in September 2011, during the next meeting of the Justice and Home Affairs Council, the Polish Presidency would successfully come to the approval of Bulgaria and Romania’s Schengen membership.

What should be proposed?

Europe must ensure it has the right tools to respond to the increased migration pressure based on the world economic and political situation and inadequate distribution of welfare, which is a topic of another political area. I believe that the European communitarian approach – in the field of EU common immigration and asylum policy and external border control (Schengen acquis) – is the reliable instrument that could bring solution to the migration challenge. Similar to the discussed proposal for establishment of a European Economic Government, I think here about the establishment of a European Internal Affairs Government.

External border security – a key element of the Schengen acquis – must be strengthened. I personally consider the current debate on „the changes to Schengen“ should focus on the effectiveness of Schengen rules’ enforcement in line with the principles of solidarity and shared responsibility between the Member States. The “changes to Schengen” reform must guarantee that the Schengen acquis will be applied uniformly and continuously in all participating countries. Thus I view positively the establishment of an evaluation mechanism launched by the Commission in its proposal from late 2010 and supported by the European Parliament’s Resolution from early July 2011 on „changes to Schengen“ . This reflects the above principles because it aims at ensuring the effective monitoring on Member States’ attempts to illegally re-establish internal border control. In this respect, I also welcome European Council’s decision from 23-24 June  to ask the Commission to submit a proposal elaborating a mechanism applicable in exceptional circumstances putting at risk the overall functioning of the Schengen cooperation. The UEF should share the view of Member States’ leaders that the exceptional temporary reintroduction of internal border controls, foreseen under this mechanism, should be a last resort measure, subject to strict criteria and keeping EU citizens’ right of free movement intact.

Further, the UEF should recall the obligation, laid down in Article 77, Par 1, „c“ of the Treaty on the Functioning of the EU that the Union should „develop a policy with a view to gradually introduce an integrated management system for external borders„. The European Federalists should consider that in short and medium term the EU institutions should participate, together with the Members States, in the effective external border security. Its long term vision should be  the EU to gradually replace the Member States and take responsibility for this task. Considering the historical development of national borders and the classical 19th century understanding of sovereignty, the transfer of external EU border security competency to communitarian institutions will be an enormous integration step, which will bring the EU to another level of  post-national union from the 21th century. In our view, this policy development is the necessary step that will guarantee а higher degree of proper implementation of the common EU acquis in this area. Such development, however, requires the EU have the adequate tools to properly manage its external borders.

The UEF should consider that the debate on the future of the EU migration policy could not be reduced to the reform of the rules governing the protection of the external borders of the EU. Migration requires a complex vision for reforms of related EU policies, more specifically, the EU immigration and asylum policy.

The European Federalists should fully agree with the Commission’s approach to focus the efforts of the EU on implementing long-term measures on migration laid down in its Communication on migration from 4 May 2011 . This proposal is perfectly in line with the nature of irregular third countries’ migration – which is far more permanent, rather than an occasional phenomenon. That is why it should be managed continuously instead of spending efforts and resources on resolving it once and for all. The UEF should consider the debate on the future of the EU immigration and asylum policy should embrace this long-term vision as a plausible basis on which further policy initiatives to be built upon.

In line with Commission’s observations, we acknowledge there is a need of authentic solidarity between Member States in situation of migration crisis. However, adequate mechanisms aimed at supporting the countries directly exposed to massive migratory movements are still necessary. They should be firmly addressed in Commission’s future legislative proposals, following the Communication, and supported by the Parliament and the Council. In this regard, the UEF should call upon the improvement of the mechanisms impeding the timely use of the General Program „Solidarity and Management of Migration Flows“, and the four funds under the program, which are currently not easily operational in crisis situations.

Moreover, the UEF should welcome the Commission’s proposal for intensive use of readmission agreements in EU relations with countries considered a source of irregular migration. I believe these agreements, together with the Schengen acquis, count for achieving the objective of limiting irregular migration. They should therefore constitute an element of conditionality within the larger context of the EU neighborhood policy in both dimensions – Southern and Eastern. However, as correctly stated by the Commission in its Communication on migration, the implementation of this instrument is far from being efficient. This is quite evident in the case of Turkey which hasn’t yet taken the necessary measures to ensure the finalization of the readmission agreement with the EU.

That is why the efforts of the responsible institutions should focus on planning measures aimed at increasing the current level of proper implementation of concluded readmission agreements.

Finally, the UEF should be persuaded that common criteria for immigration are needed as a measure of control to migration flows. Immigrants to EU Member States should be assessed against strict criteria ensuring the strategic goal – to make the EU knowledge-based economy and competitive world trade partner – will be completed and that the demographic challenges for Europe will be faced. This recommendation is in line with the commitment of the Member States to establish the Common European Asylum System (CEAS) by 2012. It should  support this objective and believe that once achieved the CEAS will constitute the basis of a genuine EU common asylum policy incarnating the founding values of the EU – democracy, freedom and rule of law. Along with these values, but also with the international acts in the field of asylum, the EU must guarantee aid and protection to people „persecuted“ in their own countries for reasons of race, religion, nationality, membership of a particular social group, political opinion or sexual orientation. At the same time, the UEF should  consider - it is crucial that any policy development in the field of migration and asylum must guarantee that the rule of EU values on the territory of the Member States is not threatened.

I believe that more than ever Europe should profit from its know-how, and I invite the European Federalists to fully join this belief. Europe not only knows how to survive in times of crisis. Europe knows how to transform a crisis into its own asset and dialogue is its key vehicle.

In this dialogue the European Federalists’ should defend Europe’s solidarity and shared responsibility. Only then Europe’s asset will be the prosperity and security of its citizens and a new level of integration ready for the challenges of the 21th century!